Why I Wrote Books About Hockey…

Welcome to my website, home of fictional hockey books for kids and teens. It can be hard to get kids to read, even more now than in the past with social media, texting, and games like Fortnite and Roblox competing for their attention. If a tween or teen has an interest in a particular hobby, then books on those topics could inspire them to read.

I wrote my Hockey Rivals books for young hockey players and hockey fans, because when I was growing up, I couldn’t find many books about hockey. Sure, there were hockey player biographies and autobiographies, but I wanted to read exciting hockey fiction books that reeled me into the story. That’s how I came up with the idea of twin brothers who compete on and off the ice.

Hockey Book For Teens By A Teen

You’ll notice that my book covers say by Stacy Drumtra-Juba, but they are listed on the retail sites as under Stacy Juba. That’s because Face-Off was originally published under my maiden name, Stacy Drumtra, when I was 18 years old—in the early 1990s. I wrote the manuscript when I was 16, scribbling away in my high school study halls.

I received a publishing contract for Face-Off during my freshman year in college, and this hockey book for kids and teens was on its way to becoming a hockey classic. It received positive reviews from all of the top review publications, showed up on many reading lists, and generated lots of fan mail from the kids whose lives it had touched. 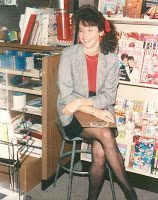 The original edition went out-of-print many years ago, but I wanted to bring it back for a new generation of readers. Since I have several other books published under my married name, I listed the novel under Stacy Juba with retailers so that it would appear with the rest of my catalog.

I’m super excited that the previously unpublished sequel, Offsides, is now available also! It was rewritten and released 26 years after the publication of the first book. This second book about hockey was one of the most rewarding projects I’ve ever undertaken as I had such a unique collaborator—my teenage self. Part of Face-Off’s charm is that it was written by a teen for teens. With Offsides, it was neat to have my teenage self collaborate with my adult self (now a parent) and to blend both perspectives in my second hockey fiction book.

I hope you enjoy reading the Hockey Rivals books as much as I enjoyed writing them. I haven’t ruled out the possibility of a book three. I’ve also published adult mystery novels and a fairy tale chick lit series for adults, a YA supernatural thriller, and children’s picture books. Feel free to visit me on my other website and blog, www.stacyjuba.com.

Much to my dismay, my 6th grade hockey player doesn’t care for reading. We gave him your Face Off book at Christmas and he loved it! Thank you for helping to contribute to my efforts to show him that reading can be fun!

Stacy Juba does a great job showing the emotional issues both boys are facing. I could see many kids and adults relating to this story. I recommended this book to my son and the kids on his PeeWee hockey team.

Lots of action and emotional upheaval ensure that this will be a popular book for boys as well as girls. This reviewer’s YA Book Review Group gave it nine points out of a possible ten for ‘Good Read’ status.