Sports Book For Kids And Teens 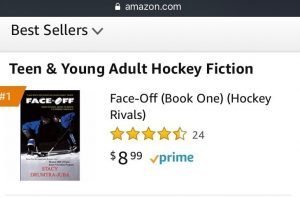 One of the most beloved sports books for kids, Face-Off has gotten tweens and teens happily reading for over twenty-five years and has remained so popular that it inspired a sequel, Offsides. Head-to-head, skate-to-skate, it’s winner takes all!

Rival twin brothers battle on and off the ice in this dynamic ice hockey novel written when Stacy was just 16-years-old. Discover why this compelling sports book for upper elementary age, middle school, and high school has appeared on so many reading lists including Best Books for Young Teen Readers Grades 7-10 and a list produced by the Hockey Hall of Fame’s Junior Education Program.

Brad’s twin brother T.J. has gotten himself out of the fancy prep school his father picked for him and into the public high school Brad attends. Now T.J. is a shining new star on the ice hockey team where Brad once held the spotlight. And he’s testing his popularity with Brad’s friends, eyeing Brad’s girl, and competing to be captain of the hockey team. Meanwhile, the twins must also cope with problems at home, including divorcing parents and a troubled younger brother. The whole high school is rooting for a big double-strength win…not knowing that their twin hockey stars are heating up the ice for a winner takes all face-off.

Listen To The Audible Sample Below:

Discover why this compelling sports book for kids and teens has appeared on so many reading lists including Best Books for Young Teen Readers Grades 7-10 and a list produced by the Hockey Hall of Fame’s Junior Education Program. Buy it on:

Other Retailers and Subscription Services

Schools and libraries: You’ll also find it listed at OverDrive, Baker & Taylor, and other catalogs geared toward libraries.

Listen to the audiobook edition narrated by the fantastic Maxwell Glick:

Tools for Teachers and Librarians

The below resources can be downloaded as PDF files. Once you click on the file, there will be a slight delay while the PDF downloads. This requires Adobe Acrobat Reader, which you can download here for free.

What Readers Are Saying About This Beloved Sports Book For Teenagers And Middle Schoolers...

“There are a pile of moral lessons in Face-Off to help teach readers about the ups and downs of relationships with family and friends, and these are reinforced throughout the book by both the McKendrick family and by T.J.’s and Brad’s coach…I am happy to say that Face-Off certainly deserves the Teebz’s Book Club Seal of Approval.” Hockey Blog in Canada

“I loved this book! First off, I am a huge hockey fan. (Born and raised cheering on the Washington Capitals.) Second, this book perfectly demonstrates the inner turmoil inside families, whether it is the side effects of parents fighting or sibling rivalries.” AriesGrlBook Reviews

As Mrs. McKendrick and Chris followed Jory into the living room, Brad and T.J. stared at each other. Finally, T.J. said, “Look, you’ve been ticked at me since practice. You’re mad that I got made cocaptain aren’t you? Come on,” T.J. said when Brad didn’t respond. “I’ve got just as much right to it as you do.”
Brad scoffed. “Hardly. I’ve been slaving on that team since I was a freshman.”
“So? It’s not like I’ve never played the game before.”

“It doesn’t matter. I’ve been playing for Bayview for three years and you haven’t even played one game for them!”

“Look, it’s not my fault that I got yanked out of Hayden! I didn’t ask to go to Bayview. You think I wanted to leave all my friends and go to a new school? It’s hard enough going there without you acting like such a jerk.”
“You’re the one who’s acting like a jerk, T.J.”
“You’re just afraid that I’m going to do better than you, and you can’t take it!”

“Are you kidding? You may be Dad’s precious genius, but you’re never going to be better than me at hockey. And if you think I’m playing on a line with you, you’re crazy. So let’s just see who Reynolds sends down a line, T.J.,” Brad challenged his brother.
“Yeah, well have fun playing with McCann,” T.J. snapped.
Brad shoved his brother into the refrigerator, and T.J. promptly pushed him back. They were grappling with each other when their father strode into the room and ripped them apart.

“Look, I don’t know what this is about,” their father began, “but you two have an obligation to your teammates. You can’t just go back on that because of personal differences.”
“He started it,” T.J. said.
“I don’t care who started it. I just want it stopped.”

Buy the paperback from Amazon and get the Kindle version for the reduced price of 99 cents.

Much to my dismay, my 6th grade hockey player doesn’t care for reading. We gave him your Face Off book at Christmas and he loved it! Thank you for helping to contribute to my efforts to show him that reading can be fun!

Stacy Juba does a great job showing the emotional issues both boys are facing. I could see many kids and adults relating to this story. I recommended this book to my son and the kids on his PeeWee hockey team.

Lots of action and emotional upheaval ensure that this will be a popular book for boys as well as girls. This reviewer’s YA Book Review Group gave it nine points out of a possible ten for ‘Good Read’ status.