What do the Boston Bruins and the U.S. Olympic Men’s Hockey Team have to do with my Hockey Rivals series? Actually, quite a lot.  Here’s the story of why it took me 26 years to publish a sequel to my classic YA hockey book Face-Off. How crazy is it that the sequel, Offsides, just came out last fall?

It’s even crazier when you consider that I wrote Face-Off when I was a teenager. I got really obsessed with pro hockey during the late 1980s and early 1990s. It started with the 1988 Olympics, which featured hockey players like Brian Leetch, Craig Janney, and Tony Granato. Once it ended, I started following the Boston Bruins.

The Bruins were awesome, playing the Edmonton Oilers in the 1988 Stanley Cup Finals. They lost, but they were still awesome. Soon, I had posters of Cam Neely, Ray Bourque, Craig Janney, and Bob Joyce hanging on my wall. Even though Wayne Gretzky was a rival, he was amazing to watch, and I even had him on my wall. Plus he was marrying actress Janet Jones, who I loved in the gymnastics movie American Anthem. So, I could forgive him for not being a Bruin.

In high school, I kept painstaking records of the Boston Bruins’ wins and losses. An avid reader, I also read any magazines and books about NHL hockey that I could get my hands on. I had a subscription to Hockey Digest and I’d pick up copies of Hockey Illustrated at the store. My dad took me to Bruins games and I’d buy various publications at Boston Garden. I read Gretky’s autobiography, and biographies of Bobby Orr and Phil Esposito. But I couldn’t find any YA hockey books at the library or in bookstores. Since I liked to write, I decided to write my own hockey books for teens – partly to entertain myself and partly on a whim. I’d seen an ad in Tiger Beat magazine for a young adult novel competition, open to teenagers, and I decided to write a YA hockey book and enter it in the competition. 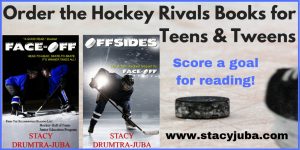 Buy Them On Amazon

I had a blast writing my hockey story of two brothers, T.J. and Brad McKendrick, who battle on and off the ice. I wrote in a notebook during high school study hall (and ahem, during boring classes when the teacher wasn’t looking) and my friend Joanne would give me feedback. I typed it at home on a Brother word processor. (Remember those?) I set the book in Massachusetts, a hockey hotbed, and made the boys Boston Bruins fans.

To my shock, I got a telegram during my freshman year in college, notifying me that I had won. I received a contract from a major New York publisher and it was a whirlwhind of local newspaper publicity and booksignings. I received fan letters like this one asking for a sequel:

“This is, by far, one of the best books I have ever read. Face-Off has an excellent climax and a superb plot . . . This is one book I think every hockey fan should read. Your book shows how in hockey, it’s not a one-man show and it takes a whole team to win. I know a sequel to Face-Off would be great. I couldn’t change any part of this story to make it better if I tried.”
– Adam from Ohio

Behind The Scenes Of A YA Hockey Book

So, in 1993, I decided to write a sequel. I finished the first draft of Offsides when I was twenty, a college sophomore. But when I submitted it to the publisher, there had been a major restructuring and my editor was gone. No one there remembered Face-Off as I got rejected with a form letter. Then I sent the story to other publishers. They weren’t interested in a sequel to a novel published by another company. Since no one would publish it, I put the book in a drawer.

Fast forward to 2011. After years of working as a reporter and continuing to write fiction, I was back in the publishing game with two adult mystery novels Twenty-Five Years Ago Today and Sink or Swim, and my young adult supernatural thriller Dark Before Dawn. Thanks to the growth of ebooks, there were many more opportunities for authors than there had been in the 1990s.

Since Face-Off was only available from used bookstores, I self-published a second edition in ebook, paperback, and Audible formats. It immediately started selling, and I vowed to publish Offsides also. I hired a company to scan my old manuscript into a computer so I could work with it again.

The book needed a lot of rewriting. I began researching junior hockey and Division 1 scholarships, but when my daughter was diagosed with Type 1 Diabetes in 2013, it hit me hard, and I stopped writing. When the words finally started flowing again, my muse was directing me to write my Storybook Valley romantic comedy series for adults. I needed to write something light and funny.

But I couldn’t stop thinking about my old friends Brad, T.J., Chris, and Jory, especially since mothers and grandmothers kept emailing me to ask about a sequel. Suddenly, I was inspired to go back to it before another generation outgrew the book.

This was one of the strangest, most rewarding, projects I’ve ever undertaken as I had such a unique collaborator–my teenage self. Once I got going, writing in the voices of the McKendrick boys felt totally natural to me. The twenty-five year wall disappeared and it was as if no time had passed. Over the next six months, I rewrote every single word. I’m grateful to my teenage self though, as she provided the basic outline. My adult self fleshed it out and improved the writing. I have to admit, it was fun giving the boys cell phones and showing them texting and on social media.

It was also interesting as my original “outline” was penned by a teenager, but when I was rewriting it, I had a parent’s perspective. Part of Face-Off‘s charm is that it was written by a teen for teens. With Offsides, it was neat to have my teenage self collaborate with my adult self and to blend both perspectives. I am also grateful to the organization College Hockey, Inc. for answering my questions about junior hockey and Division 1 scholarships.

Here is the blurb for the sequel. Twin hockey stars Brad and T.J. have finally resolved their differences and forged a friendship on and off the ice. What should have been the best year ever takes a nasty hit when the boys’ parents announce their divorce, and Brad makes a mistake that could impact his game eligibility. Meanwhile, T.J. faces off against their father, who opposes his decision to delay college and pursue junior hockey.

Adding to the tension are a rebellious kid brother, girlfriend trouble, and recruiting pressure. The turmoil threatens to drive the twins apart just when they need to work together the most. With a championship title and their futures at stake, T.J. and Brad must fight to keep from going offsides.

The book is available in paperback, e-book, and audiobook formats. I’m excited as the Audible audiobook edition came out last week, and in a neat twist of fate, the Boston Bruins are going to be facing the St. Louis Blues in the Stanley Cup Finals next week. How nice that the B’s inspired me to write Face-Off, and that Boston Bruins hockey is still going strong.