Illustrated Children’s Hockey Book Is A Winner For Kids 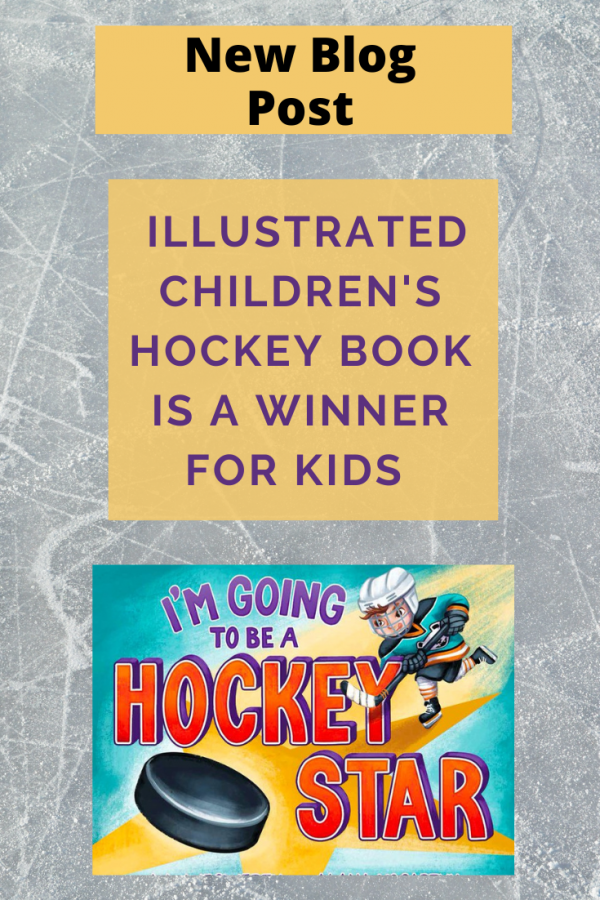 I recently had the opportunity read and review an adorable children’s hockey book: I’m Going To Be A Hockey Star written by A.L. Wegwerth and illustrated by Alana McCarthy. As soon as I started reading. I knew this delightful book was pure magic for young hockey fans. Vivid pictures and lively text capture the adventures of a boy attending his first youth hockey practice.

It’s a wonderful book for parents to read aloud to their little hockey players. Kids already on a team will relate to the authentic illustrations and text, and those nervous about their first day will learn what to expect so they can ease their jitters. Positive messages are sprinkled throughout the story such as “They’ll tell us that it’s OK to fall, and all that matters is that we get back up.”

This story is a winner, and I’m happy to feature an interview with the author, A.L. Wegwerth, who hails from Minnesota, the State of Hockey, and is what you might consider a pioneer in women’s hockey. She played high school and college hockey before an injury forced her to hang up her skates for a few years.

These days, you can find her on the ice either coaching youth hockey or playing a game of shinny in the backyard with her three kids. She is the author of four other books, including Hockey Talk: Sauce, Spinorama, and More Ice-Time Lingo, a book for die-hard hockey fans.

Tell me about your background in hockey. How did you get interested in the sport and how many years did you play?

Honestly, it was Mighty Ducks that got me and my twin sister interested in playing hockey. We started playing at an age that would be considered very late in today’s terms—fifteen years old. But it was when girls’ hockey was just starting to grow in Minnesota so it wasn’t unusual for the time. I played PeeWee hockey then on the high school team before playing four years of Division III hockey. 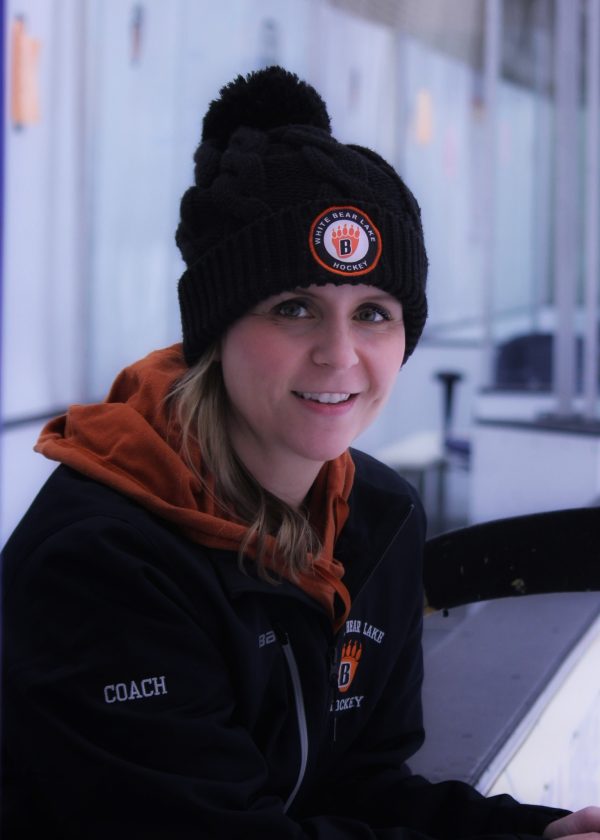 What type of injury did you get and how long did it keep you off the ice?

I tore my labrum in my right shoulder—the first time I did it I was playing water volleyball. At this point, I was in my twenties and playing in a local women’s league. But I began to more frequently dislocate it playing hockey or even just moving my arm too fast. The first doctor I saw misdiagnosed my condition, so I thought I was just being a wimp. I would literally dislocate my shoulder during a hockey game then put it back in and go back out there to finish the game. Finally, I knew something wasn’t right so I found a different doctor and learned that I had, in fact, been dislocating it all along. I had my first surgery in 2009, and with a yearlong recovery, decided to hang up my skates for a while. Also playing into this decision was that my husband and I were looking to start a family. I ended up reinjuring my shoulder while on maternity leave with my second child, but held off on surgery until my third (and last) child was two years old. I knew how much time and effort went into coming back from a surgery like that, and that there was no way I’d be able to do it with an infant.

I only recently started playing again—I sub on the women’s team I used to play for. With three kids in hockey and two parents coaching, it’s too much to commit to playing full-time. But I imagine there will be a day when I’ll be back at it more regularly. For now, kids’ hockey practices and skating on our backyard rink will have to suffice.

What age do you coach and what do you like about coaching kids?

Right now I’m co-head coaching my oldest daughter’s 10U team and helping on my youngest daughter’s 8U team. One of the things I loved most about playing hockey was the friendships I made with my teammates and the life lessons I learned by playing. I love that I have the opportunity to be a part of this for my team(s).

As the only female on the coaching staff, the girls have told me I’m their favorite coach. It’s a lot of work to commit to coaching a team (I also work full time), but the main reason I do it is for the girls to see a woman in a position of power. I had very few female coaches growing up, and I want these girls to see the possibilities. Because if you can see it, you can be it. 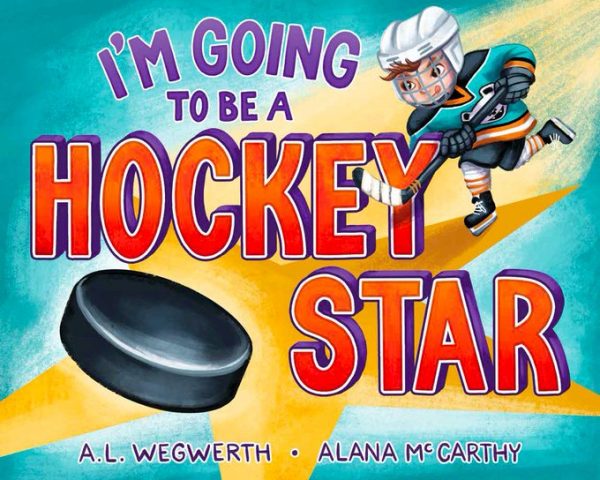 How did this picture book come about?

A former coworker started his own publishing company and approached me about a book he wanted for beginning hockey players to help alleviate the fears of a first hockey practice. I definitely saw a need for a book like that, but I also didn’t want the book to be dull or didactic. So I pitched him three and a half ideas of the direction the book might go. I say a half idea, because just before I was going to hit send, I had the start of an idea. (We had worked together in children’s publishing long enough that I knew he would know where I was going with it.) He responded to me really quickly saying he liked that half idea—a hockey player arrives at his first hockey practice and starts to imagine his life as a hockey star—and the rest is history.

What was your “goal” for the book? What do you hope children will get from reading it?

I love books with imagination, humor, and playfulness. For new hockey players, I hope this book gets them excited to play. And for all kids, I hope it inspires them to dream big—whatever their dream may be.

What advice would you give to young kids going to their first hockey practice? Do you find that most kids are nervous at first?

Have fun! The ice is going to be slippery and you’re probably going to fall. All that matters is that you get back up.

What advice do you have for parents whose kids are starting out with hockey?

Hockey is a big commitment for both the parents and the players. I’d make sure their player is having fun—focusing on their effort and how you enjoy watching them play and improve. I also like to focus on how good a teammate the player is. Do they pass? Do they cheer for their teammates?

And as a parent, I would encourage you to make friends with other parents. It makes the season and time commitment more enjoyable. I love our hockey family!

Do you think a lot of children have big dreams of playing professional hockey?

I think there is a segment of players that have a pipe dream of going pro, but probably like to imagine the possibilities of what might happen—scoring a game-winning goal, team winning the state tournament, etc. I love the freedom and possibility that comes with dreaming big, and that’s what I wanted to come through in this book.

The illustrations were adorable! What was it like seeing your story illustrated? Were there any surprises?

I was really lucky that I got to work with illustrator Alana McCarthy along the way. We had a conversation before she started, and I sent her some reference photos of my kids in their equipment. Despite being from Canada, she does not have a hockey background. So I helped review sketches to ensure things such as hand placement on stick and skating form were correct. Still, when I saw the final art I was blown away. The book has such personality and her color work is gorgeous.

One thing I was surprised to see was the mom featured in the background of many scenes. After I finished reading it to my then ten-year-old son, I very seriously asked, “Do you know who the real star of this book is?” He looked confused and said he did not. “It was the mom,” I said, “who took him to every practice and supported him every step of the way.” He just rolled his eyes and walked away. My humor is definitely underappreciated in my family.

Tell me about your other hockey books and who the audience is for those.

I have one book out right now titled, Hockey Talk: Sauce, Spinorama, and More Ice-Time Lingo that’s aimed at kids in grades 3-5.

This book features a little boy with big hockey dreams. The decision to make the main character a boy was made after a conversation with my publisher. Yet the book features a diverse range of players—including female players and a female coach.

More About The Book

The very first hockey practice can be a little scary, but not if you are planning to be the world’s greatest hockey superstar! Follow the action and relish the dreams of a confident young boy as he begins his journey to hockey stardom. See what happens at a hockey practice, learn about the excitement and fun of the game, and experience the lovable chaos of the ice arena. With humor and a little bit of attitude, A.L. Wegwerth has written a great introduction to the sport, while Alana McCarthy’s vivid style brings the game to life for future hockey stars.

Aimed at kids ages 3-7, the story was published by River Horse Books.

Buy it on Amazon.