Nick Boorman is no stranger to high school hockey. Besides penning the novel High School Hero: Freshman Year for Page Publishing,  he is also a high school hockey and soccer coach and physical education teacher. Teaching life lessons through sports is his passion. High School Hero introduces Gunner Bale, a first-year high school athlete who sets high goals for personal achievement in the classroom and on the ice. When he is selected for the freshman soccer team, he vows to do everything in his power to make the varsity hockey team; will it be enough? Here is an interview with Nick.

Have you had other careers before becoming a writer?

I am actually a really busy person. Besides being a writer, I coach varsity high school hockey and soccer. I am also a physical education teacher, summer camp director, and intramural sports coach. Becoming a published writer is a new chapter for me.

What inspired your latest release?

I have been a teacher for 10 years. When I started teaching I realized that many of my students who enjoyed sports did not have enough books they could relate to.  This led to many students saying they did not like to read. I decided to write a book that they would enjoy, not be embarrassed of, and actually learn life lessons through the story.

Were you “born to write” or did you discover your passion for writing later in life?

I was not “born to write”. I have the learning disability dyslexia. Because of this, I grew up a struggling reader. Even though it was hard for me to read I still enjoyed it. Throughout my life I have learned a lot of great life lessons from sports such as the importance of teamwork, perseverance, always displaying high character, and positive leadership. As a teacher and coach I teach these lessons every day to my students and players. I wanted to reach a wider audience for my positive message. That is why writing this book was so appealing to me.

I was always told growing up that I was a good writer, but it took me longer to write than most of my peers. To be honest I was scared that I would never be able to finish a book. But because I was writing about something that really interested me I really enjoyed the process and finishing the book was not a problem.

How much of you is in the books you write? In what ways?

A lot of experienced writers say that writing about what you know is a great way to start. That is what I did. As a hockey and soccer player since kindergarten, those two sports helped shape who I am today. I wrote about many of my life experiences through a fictitious character. This book is by no means my life story, but there are things that happened to me and my friends that feature throughout the book.

Do you outline your books or wing it? Describe your process.

I outlined this book for seven years before I began writing. When I started teaching and realized that a vast majority of the athletes could not find a book that interested them that is when the creative juices started following. After seven years of outlining and planning, the book was more than ready to be written.

Do you have a view in your writing space? What does your space look like?

My writing space was different all the time. I carried my laptop with me everywhere I went and wrote in different places. I also came up with ideas in my head and would write notes in my phone regularly. The place where a vast majority of my book was written was in a quit dark room. There were no distractions, just me visualizing the story in my head.

The main character of the book is Gunnar Bale. His main goal is to make his high school varsity ice hockey team as a freshman. Gunnar is small for his age and sports do not come easy to him. But Gunnar’s strength is his high character. He is a great friend to Amari and Wes, he is intrinsically motivated to be the best, and he has a contagious positive no quit winning attitude.  Gunnar’s weakness is controlling his emotions. Sometimes he acts before he thinks. This is something that many teens in the target audience can relate to.

There is an exciting scene in the book about a high school party. I certainly do not want to give away that scene. The person I would want most at the party is one of the main characters, Amari. Amari is an extremely hard worker, a great student, quarterback of the football team, hopeful for the varsity hockey team, and a great friend. Amari is a collection of the best parts of many of my friends growing up.

The person I would not want to at my party, and I would never invite to my party is Jimmy Marley. Jimmy is a very poor decision maker. He is a negative influence on all that cross his path. Jimmy portrays the negative path teens can go down while in high school.

What might we be surprised to know about you?

I was the captain of my high schools soccer, hockey, and lacrosse teams. I played college hockey for four years and captained the team as a senior. 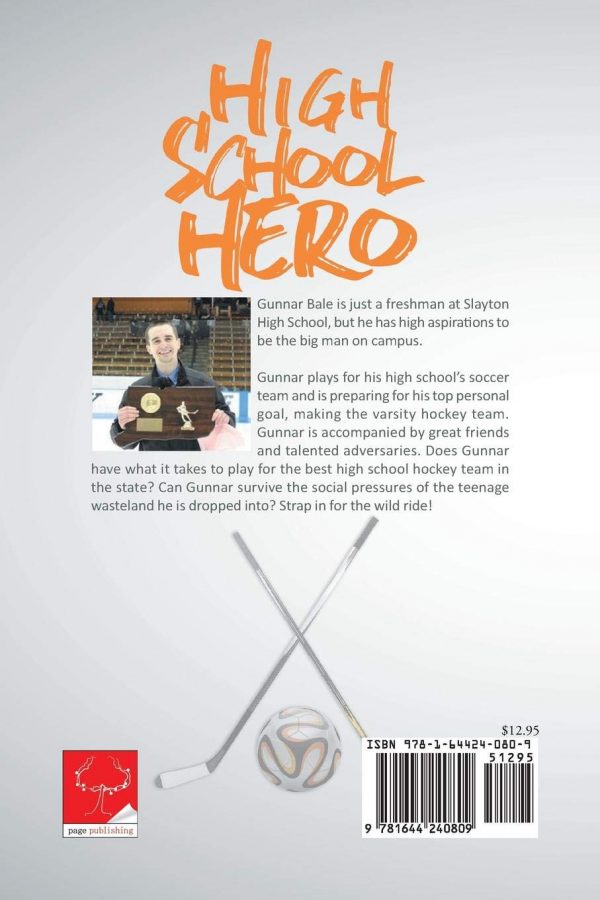 Gunnar Bale is just a freshman at Slayton High School, but he has high aspirations to be the big man on campus. Gunnar plays for his high school’s soccer team and is preparing for his top personal goal, making the varsity hockey team. Gunnar is accompanied by great friends and talented adversaries. Does Gunnar have what it takes to play for the best high school hockey team in the state? Can Gunnar survive the social pressures of the teenage wasteland he is dropped into? Strap in for the wild ride!

Below is an excerpt from the book. Gunnar Bale has been training to make his school’s varsity ice hockey team. A new student moves to town who is a great hockey player, and Gunnar challenges him to a roller hockey game. . .

As Gunnar walked up to the roller hockey rink, upperclassmen were patting him on the back and yelling his name. Gunnar was all smiles. He loved the instant popularity and limelight. For a second, he forgot how nervous he was.

Gunnar started to strap up his rollerblades and the crowd started to get restless. Where was Jonny Clarke?

When Gunnar was fully suited up, the varsity guys skated off the rink. It was just Gunnar in the arena, with over three hundred raucous fans surrounding him. He started to skate around and stick handle. He had worked on his game so much, and he wanted to show it off. As he showed off some moves, toe drags, and dekes, the crowd oooed and ahhed.

The crowd was getting restless. Where was Jonny Clarke? Someone from the crowd yelled, “It’s past 6:15 p.m. This kid from Cali isn’t coming!” Right as he yelled this, a loud engine made a roaring noise. Everyone looked to the top of the hill parking lot. It was a brand new Maserati. Out stepped Jonny Clarke with his long bleached-blonde hair flowing in the wind, and his big muscles on full display. His rollerblades were already on and laced up. Jonny lived on the Slayton-Crayfield town line, better known as the filthy rich part of town.

All of Gunnar’s nervous thoughts instantly returned. He was about to play this monster of a freshman in front of three hundred screaming fans. He thought that if he won, he would be the hero he longed to be. If he lost . . . he couldn’t allow that to happen.

As Jonny zipped down the steep hill, the crowd started to get really loud, and the lights came on in the park and perfectly lit the entire rink. It was like he was a pro wrestler, strolling into the ring with a sold-out audience. Jonny played the role of the rockstar villain perfectly.

Jonny yelled out to the crowd, “Sorry to keep you waiting, I’m still on West Coast time. But I’m here. Let’s play some hockey!” The crowd cheered!

Jonny skated over to Gunnar. “Good luck, bro.” They both shook hands. “Everyone is here to see this. Hope you’re ready,” said Jonny with a smirk.

Nate walked out to the middle of the rink. “Listen up, everyone!” he yelled, “The game is to five, loser’s ball on every goal. Take backs to half court. These two diaper dandies will be shooting on the baddest goalie in high school hockey, the BRICK WALL, Steven Gomez!”

Steven went between the pipes. The crowd was shaking the fence and cheering their brains out. Jonny and Gunnar put their sticks down for the face-off. Gunnar looked right into Jonny’s eyes with the fiercest look he could muster up. He wanted to win the early psychological battle.

Jonny, as cool as the other side of the pillow, just smirked and  tapped his stick.

Nate dropped the hockey ball—GAME ON!