When I heard this cool story about two hockey dads, I just had to interview them for my blog. Last November, Zach Lamppa and former NHLer Tom Chorske broke the Guinness World Record for longest hockey pass. The record pass took place on Nov. 20, 2018 on the pristine early ice of Lake of the Isle in Minneapolis. A YouTube video of the record breaking pass from these two hockey dads has garnered attention from across the hockey world, including an interview on the NHL Network. You can read more about the record below, and be sure to check out Part 2 of this interview as it contains great tips for hockey families. 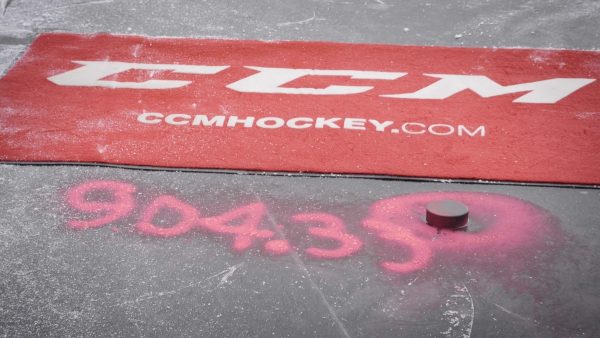 Sharing A Love of Ice Hockey

Zach, who grew up in Virginia, MN, and now resides in Detroit Lakes, MN said that the record was broken to prove that anyone is capable of doing great things.

“I’ve always wondered how far I could actually pass the puck in perfect conditions,” he said. “We did this to inspire people. You never know what’s possible until you try.”

On his first official attempt, Zach shattered the old record of 894 feet with a pass that traveled 904 feet and three inches. On the receiving end of the record pass was Minnesota hockey legend Tom Chorske, a former Golden Gopher star and Stanley Cup Champion.

“The people at Guinness make the terms,” said Zach. “We had to have regulation equipment, a survey crew, and officials. It’s not just something you can just go out and do, you have to plan. There’s a criteria you must meet.”

These good friends have played at different levels, but share a common love of hockey. They met through a mutual friend in 2002.

Zach, who has four children ranging from ages 3-to-14, played at Hibbing Community College in Minnesota. Picked by the Canadiens in the first round of the 1985 draft, Tom began his pro career in Montreal and played nearly 600 games for seven teams over the course of 11 seasons. He has two sons ages 17 and 12, and a 16-year-old daughter. His older children played on high school state championships teams; his daughter has a commitment to Harvard and his older son plans to play junior and pursue a scholarship. Tom grew up near the Lake of the Isle, skating there as a child, and was intrigued by Zach’s idea of setting a record there.

“A world record seemed kind of cool to us,” notes Tom. “The conditions were right, and Zach put together the crew of people that needed to be there to pull this thing off. The lake froze prior to any snowfall just enough for us to get on it. There wasn’t any snow on top of it or imperfections, so it was kind of smooth as glass.” 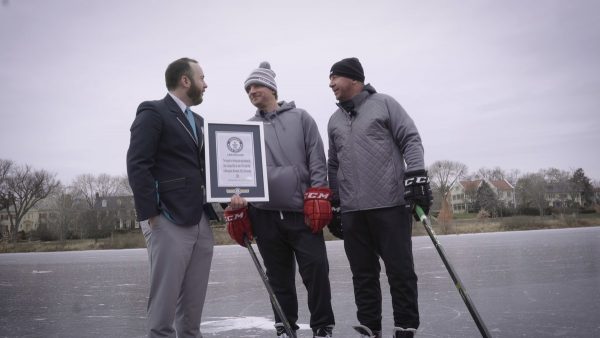 Family Event In The Works

They hope that this record can inspire others. The two hockey dads are in the early stages of organizing an annual family event in the Minneapolis/St. Paul area which would unite various ages and talent levels. It would feature ice hockey events and possibly others winter sports such as curling and figure skating. Attendees would have the chance to try their hand at setting a Guinness World Record.

“As a person and a father of four hockey players, hockey has given me so much,”  Zach said. “I am not the greatest player in the world, but this challenge helped me to prove that if I can do it, anyone can do it. We’re hopefully inspiring some kids to go out and break our record, and there are so many other records that can be broken. With the event we’re planning, we hope to inspire kids who didn’t make the A-team, but have a certain skill set that they can come out and showcase, and inspire kids who think they can’t do it or have been told they can’t do it. We’ll see how it grows. Hopefully this will resonate in the hockey community. I’d love to see other communities do something similar.”

Long before he was breaking Guinness world records, in 1985, as a high school senior Tom became Minnesota’s first Mr. Hockey Award winner.  He went on to win the Stanley Cup with the New Jersey Devils in 1995. Today he is a sales and business executive and a hockey broadcast analyst covering the Minnesota Wild and Minnesota Gophers for Fox Sports North.

“Once we broke the record, we reflected back on what was really driving us,” Tom said. “It really was our friendship. We were having fun scheming it up, and with it being a hockey-related record on a Minnesota lake, there was some coolness to it.”

Now they’re having fun organizing their family event and recruiting sponsors. While they don’t know how long the record will stand, both hockey dads hope it will inspire others.

“We are just two friends who got together to try and do something great,” said Zach. “We hope this accomplishment will show others that good things can happen to anyone.”

Check out the pass in this YouTube video. And don’t miss Part 2 of this interview, which features invaluable advice for hockey families. Coming April 13! How about posting a congratulations to Tom and Zach in the comments below for their inspiring accomplishment?